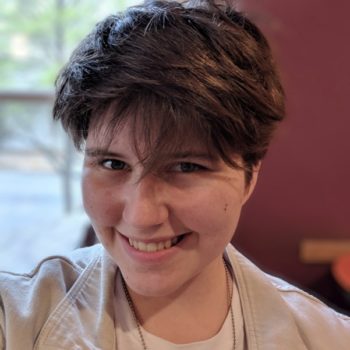 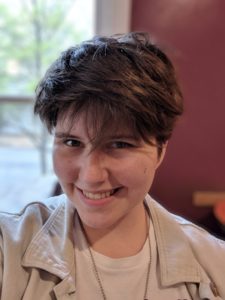 Cas Skinner is a 19 year old queer artist and future engineer from Columbia, South Carolina. They are currently in-between their freshman and sophomore years of college at the University of South Carolina, where they are studying civil engineering. They have many talents, including creating glitch art, playing the banjo, and they can even do calculus! Cas believes that art has always been pivotal to creating and finding queer spaces. As such, they have made it their mission to use their media to promote and create spaces for queer people to survive and thrive. Cas has been involved in queer groups, events, and activism efforts in Columbia for more than four years. For three years, they participated in TakeBreakMake; an LGBTQ youth media arts initiative run by the Nickelodeon Theatre. It was here where they developed their voice and embraced their queerness through art. They went on to become vice-president of their high school’s gay-straight alliance for two years, become a camp counselor at Fierce Flix (a day camp in Asheville which empowers girls and gender minorities by teaching them the elements of film), and co-write published papers exploring art and gender identity in education.
Link #2
Instagram
WordPress Portfolio