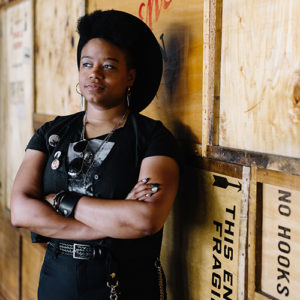 Born in Chattanooga and now based in Johnson City, Amythyst Kiah’s commanding stage presence is matched by her raw and powerful vocals—a deeply moving, hypnotic sound that stirs echoes of a distant and restless past.

Our Native Daughters, her recent collaboration with Rhiannon Giddens, Leyla McCalla, and Allison Russell (Birds of Chicago), has delivered a full-length album produced by Rhiannon Giddens and Dirk Powell, Songs of Our Native Daughters. NPR described the opening track, Black Myself, written by Amythyst, as “the simmering defiance of self-respect in the face of racism.” The group has been nominated for Duo/Group of the Year at the 2019 Americana Honors & Awards.

Provocative and fierce, Amythyst’s ability to cross boundaries is groundbreaking and simply unforgettable.